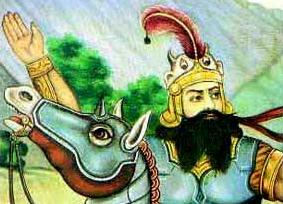 Rostam (Persian: رستم, pronounced [ɾostæm, ɾʊstæm]) is the national hero of Iran and (Greater Persia) in Persian mythology and son of Zal and Rudaba.

He was immortalized by the 10th century poet Ferdowsi of Tus in the Shahnameh or Epic of Kings, which contain pre-Islamic folklore and history.

In Ferdowsi's Shahnameh, Rostam is the champion of champions and is involved in numerous stories, constituting some of the most popular and most masterfully created parts of the Shahnameh.

As a young child, he slays the maddened white elephant of the king Manuchehr with just one blow of the mace owned by his grand father Sam, son of Nariman. He then tames his legendary stallion, Rakhsh.

The etymology of the name Rostam is from Raodh+Takhma, where Raodh means growth, reaped, developed and Takhma means brave.

(In the Avesta, the form is "Raosta-takhma" and in Pahlavi "Rodastahm")

In Persian mythology, Rudaba's labor of Rostam was prolonged due to the extraordinary size of her baby. Zal, her lover and husband, was certain that his wife would die in labor. Rudaba was near death when Zal decided to summon the Simurgh. The Simurgh appeared and instructed him upon how to perform a "Rostamzad" (Persian equivalent for caesarean section), thus saving Rudaba and the child.

See the stories of Rostam