The Stories of Rostam

By far, the most famous and popular story of Rostam in the Shahnameh is Rostam and Sohrab, in which he kills his own son Sohrab, while the two are unaware of the identity of their opponent until after Rostam wounds his son and during their final conversation the two realize they were father and son. 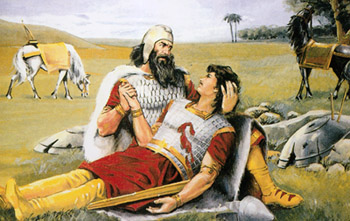 Another of Rostam's most famous exploits was his struggle against the dēw (modern Persian div "demon") named Akvan, who had initially transmogriphied as a beautiful Onager, ravaging the horse-herds of Persia. When the king was informed of this on-going problem, he realizes that it is not just an onager and it has to be Ahrimanic disguise to damage Iran-Shahr (Aryan Land). After thinking long about who he wants to assign to this task, the king finally decides that nobody other than Rostam can handle the matter. So he commissions Rostam to take care of this problem.

Various parts of this exploit are the subject of many beautiful illustrations.. 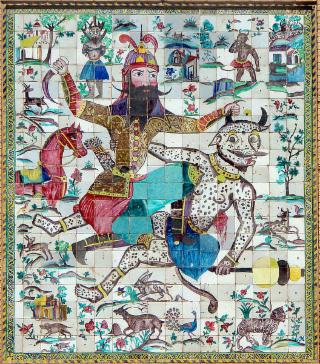 Part I : How Raksh fought with a lion

"Then Rostam, that world brightening paladin, Departed from his sire and, treating night Like day, made two days' journey into one, not giving Rakhsh repose. Now as his body Failed him through lack of food he reached a plain Where onager abounded, and urged Rakhsh To whom their speed was slow: no beast could ' scape From Rostam's lasso and his horse's feet. The Lion with his royal lasso caught A gallant onager and, striking sparks Upon an arrow's point, enkindled fire With stubble, thorns, and wood to roast the beast. He ate the flesh and threw away the bones; The onager itself was pot and tray. He spied some pasture, slipped off Rakhsh's bridle, Turned him out loose upon the meadow land, And made himself a couch within a reed bed; He deemed it safe though it was fear's own door, For in it was a lion's lair; no elephant Dared pluck a reed. One watch passed, then the lion Came boldly forth and was amazed to see An elephantine form among the reeds, Reposing with a charger standing by. " First," said the lion," I must maim the steed, Then I can take the rider when I please." He sprang at glossy Rakhsh, who raged like fire And lashed out at the lion's head, then firmed His sharp teeth in its back and dashed the beast To pieces by a shift that made it shiftless. When Rostam, deft of hand, awoke and saw How earth was straitened to that ravening beast He said:" O foolish Rakhsh! who bade thee fight A lion? Hadst thou perished ' neath its claws Could I have carried to Mazandaran My helmet, tiger skin, bow, lasso, sword, And massive mace? Had my sweet sleep been broken Thy combat with the lion had been brief." He slept and rested long, and when the sun Rose o'er the darksome hills awoke still drowsy; He rubbed down Rakhsh and saddled him, then prayed To God, the Author of all good, for aid. And continued his way.

"He had to face all dizzy as he was A desert waterless, a heat intense That dried the birds to powder. plain and waste Were as they had been scorched thou wouldn't have said. Rakhsh was exhausted, while his rider's tongue Failed through the heat and drought, and Rostam, clutching A double headed dart, went staggering Like one bemused, and saw no means of safety. He looked up saying:" O all righteous Judge! Thou bring'st all toil and hardship on my head, And if Thou findest pleasure in my pains My hoard is great indeed! I fare in hope That God will grant deliverance to the Shah, And that the Ruler of the world will free The Iranians from the clutches of the Div, Unscathed. They sinned, and Thou hast cast them out, But still they are your slaves and worshippers." This said, that elephantine form became Weak and distraught with thirst, and fell, with tongue All cracked and blistered, on the burning dust.Anon a well fed ram passed by. The hero On seeing thought:" Where is its watering place? In sooth God's mercy is extended to me!" Then in the Worldlord's strength rose to his feet And followed up the ram, with scimitar In one hand while the other grasped the reins, Until lie saw the spring, for thither went That stately yarn. Then Rostam looked toward heaven, And said:" O Judge, that ever speakest sooth! The ram hath left no tracks about the spring! It is no desert sheep of flesh and blood!" When hardships press on thee, in your concern Flee unto God, the Just One; they who turn Away from Him have wisdom still to learn. He blessed that ram and said:" Ne'er may mishap From circling heaven be thine; green be your pastures, May cheetah never mark thee for its prey; Snapped be the bow and dark the soul of him That shooteth at thee who hath rescued Rostam, Else were he thinking of his shroud; but now He is not in the mighty dragon's maw As yet, or in the clutches of the wolf, So that the fragments of his clothes and limbs Should serve as tokens to his enemies." His praises offered he unsaddled Rakhsh, Washed him, and made him shining as the sun.Then Rostam much refreshed filled up his quiver And as he hunted dropped an onager Huge as an elephant, removed the entrails, The hide, and feet, lit up a blazing fire, And having washed the carcase roasted it. This done he feasted, breaking up the bones, And having quenched his thirst prepared for sleep. He said to Rakhsh:" Fight not and make no friends. If any foe approacheth run to me, But venture not to counter divs and lions." He lay and slept, his lips in silence bound, While Rakhsh till midnight grazed and strayed around."

See the paintings of Rostam 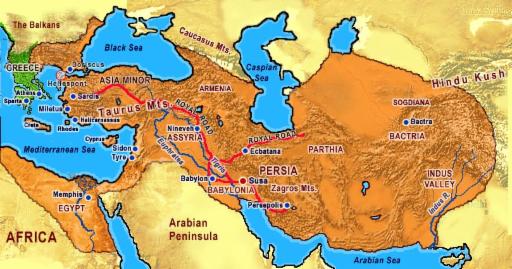